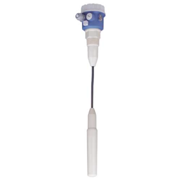 Liquipoint T sensors are used in conductive liquids (as low as 10 μS/cm) for determining level limits. Depending on the number of measuring points, measuring tasks such as tank overspill protection, pump dry run protection, two-point control of pumps or multiple point level detection can be implemented using a single process connection.

An alternating voltage exists between the rod probes in an empty tank. As soon as the conductive liquid in the tank creates a connection between the ground probe rod and, for example, the maximum probe rod, a measurable current flows and the Liquipoint T switches. With level limit detection, the Liquipoint T switches back as soon as the liquid clears the maximum probe. With two-point control, the Liquipoint T does not switch back until the MAX and MIN probe is cleared. Using alternating voltage prevents corrosion of the probe rods and electrolytic destruction of the product. The material used for the tank walls is not important for measurement because the system is designed as a closed potential-free circuit between the probe rods and the electronics. There is absolutely no safety hazard if the probe rods are touched during operation.

The measuring system consists of

The measuring system consists of

Do NOT follow this link or you will be banned from the site!
This site uses cookies to provide you with great user experience. By browsing this site, you accept our use of cookies.Souhlasím