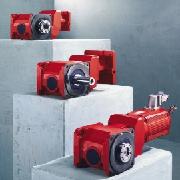 The low backlash BSF helical-bevel servo gear units are designed for the 40 to 1500 Nm (350 to 13200 lb-in) torque classes. The permitted acceleration torques are significantly higher than these values.

All versions are equipped with a B5 mounting flange and optional foot mounting and torque arm. Because of this, these drive units can be optimally integrated into existing applications. The combination of a helical input stage and a hypoid output stage results in ratio ranges which can be covered by the single-stage bevel (wheel) and hypoid gear unit or by the single-stage helical-worm gear unit with high transmission quality. The circumferential backlash remains constantly low throughout the gear unit’s service life.

Accessories and options for servo gear units and servo gearmotors

Optional for planetary servo gear units. The circumferential backlash of these gear units is reduced even further than that of the reduced backlash version and therefore allows for even greater precision when performing positioning tasks.
Do NOT follow this link or you will be banned from the site!
This site uses cookies to provide you with great user experience. By browsing this site, you accept our use of cookies.Souhlasím